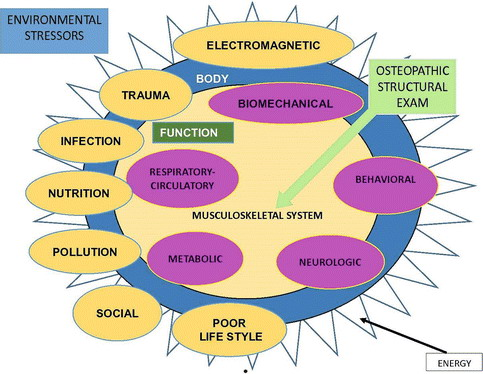 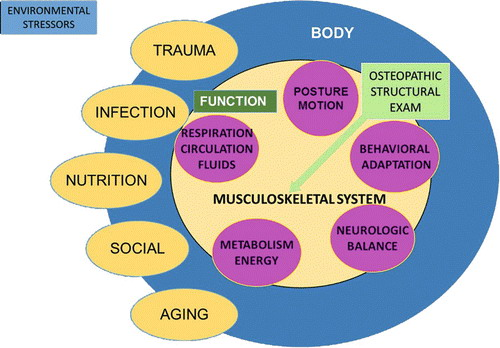 Understanding trauma from the biomechanical perspective is fairly straightforward.  This is referring to the material because of trauma.  This can be anything from a motor vehicle accident, sports injury, physical abuse, sexual abuse, etc. in the case of a motor vehicle accident, it is important to understand the mechanism such as head-on collision versus “T-bone”mechanism, the speed of the vehicle, the point of impact, if the driver lost consciousness, and other such questions are important in thoroughly assessing the trauma.  After acute injuries were ruled out in an emergency department, one can understand the long-term effects of whiplash injury, neck strains, concussions, also spasms, and fascial torsions that may affect the patient for several weeks to several years.  The same type of logic applies to other injuries and circumstances of abuse.  In the acute setting we worry about fractures, bleeds, other life-threatening injuries.  However, most general practitioners will be dealing with pains that are ongoing. These pains can stem from movements of bones, complete or partial tears of connective tissue (tendons, ligaments, mensci, fascia) and musculature, shock to the central and peripheral nervous system, damage to nerves/arteries, and more accurately a combination of the above.

Often patients with chronic pain are found to have compensatory patterns related to trauma that happened years ago.  An American osteopath J. Gordon Zink studied patterns of fascial compensation following trauma.  When a traumatic event physically occurs at a region of the body, other regions of the body will shift in an attempt to protect the injured region.  This can have long-term effects on the patient.  He found that in the majority of pain-free patients, fascial planes shift in an opposite opposing manner to form compensated patterns.  Such as a lesion in the occipital atlantal area at the base of a patient’s cranium (such as leftward torsion) will have an opposite fascial torsion at the region below (such as rightward torsion at the cervicothoracic junction).  He reports in his observations that roughly 80% of complaint free people have the following pattern: Occipital atlantal leftward torsion, cervicothoracic rightward torsion, thoracolumbar leftward torsion, pelvis (lumbosacral) rightward torsion.  Roughly the other 20% of complaint free patients were found to have a right/left/right/left pattern.  However, he observed that patients with pain complaints more often had less compensated patterns (right/right/right/right pattern, left/right/right/left pattern, etc.).  Additionally, poorly compensated fascial distortions often affect a diaphragmatic region (thoracic inlet, respiratory diaphragm, pelvic diaphragm) and lesions in one diaphragm are frequently associated with compensatory lesions in diaphragms above and below.  As one can imagine, this can have obvious effects on the surrounding viscera, musculature, and the arteries/veins/nerves that reside within the fascia.  Thus, there is a plethora of different chronic pain patterns that can develop in patients who have undergone biomechanical trauma.

It is not uncommon for bodyworkers to find palpable lesions on a patient that are far distal from the point of original trauma.  For example, when working on a patient who his been a victim of sexual abuse, one may palpate significant decrease in motion and hypertonicity and fascia in the cranium even though the point of original trauma may be in the pelvic diaphragm.  Thus, it becomes important for the body worker to address concerns and palpable dysfunctions that may be distal from the site of impact as well as the more obvious direct dysfunction.  Over time and with a good amount of experience, the patient body worker is able to hone in on what has been termed the “key lesion” in osteopathic medicine (the primary somatic dysfunction, the area that will provide the most global benefit when treated). Osteopath Judith O’Connell provides an excellent summation of the mechanism behind these effects, “Trauma in the musculoskeletal system precipitates a cascade of events mediated by bioelectric potential changes in the collagen-laden fascia. These events have local and distant effects, ultimately affecting homeostasis. Conversely, alteration in the extracellular fluid creates bioelectric potential changes affecting fascial motion. The fascia acts as a transducer for mechanical and electrical events and as a communicator between the internal and external environment. All musculoskeletal treatment—medical, surgical, rehabilitative, or manipulative—engages these properties. Harnessing these dynamics improves diagnostic skills and provides options for treatment that will enhance the patient’s ability to heal.”
Types of trauma are interrelated such that those who have undergone severe injuries or physically abusive relationships may not only have physical/biomechanical pain but compensatory psycho spiritual pain.  One trauma specialist Peter Levine has written extensively on the physical effects of trauma and how releasing the biomechanical and energetic components of trauma through various types of body work (including his developed Somatic Experiencing model), a patient can overtime work through the secondary effects of their trauma. In a similar sense, Budiman Minasny writes extensively about experiences of “Fascial Unwinding” in which spontaneous expressions of movement and occasional psycho-emotional releases of patients occur when bodyworkers are applying indirect myofascial release techniques on patients. The proposed mechanism for fascial unwinding has been described as in the figure. 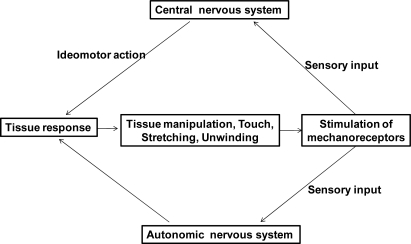